My Passion is Writing — Amp ( Played by Heidi ) 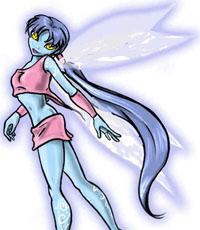 Lavender, reaches down to her ankles with straight bangs. Often worn in low pigtails.

Amp stands at 7-inches and weighs in at ~8 oz. Her skin is light blue with white tribal markings on the outside of her calves, around her wrists, across her chest, shoulders and to the side of her right eyes.

If asked she would tell you that her job was to bring happiness and love to everyone she meets.

Amplification: The ability to amplify someone’s power by simply touching them and making a small mental link. The amplification of power depends on many things [the connection between the two, Amp's strength, emotions & power level of the second person]. The most so far that Amp has been able to increase a power is by 10 fold [once].

Ora Sight: Though it’s linked to your intentions and powers. She gets a feeling when she’s around someone who is angry or wants to use their power for something harmful.

Flight: Has a set of misty white fairy wings that fold flat against her back when not in use. Can fly to speeds up 45 mph.

Weaknesses: Her size and use of powers are a heavy drain on her small body when used often at high levels. When she amplifies someone’s power it gives that person a rushed feeling, almost as though a drug. She has come across those who form an addiction to needing her ability, confessing that they need her to use their power.

Amp is a bubble of affection; she’s drawn to almost everyone and every living thing. Finding them beautiful and wanting to keep them, protect them and learn from them. She calls everyone her friend, except those that threaten or mistreat her most beloved. Though Amp appears to be an airhead floating from place to place she is in-fact very knowledgeable and can hold a serious conversation when it’s needed. She loves learning new things and sharing what she does know.

She is a love-bug; Amp loves and trusts everyone first off. Betrayal is not a thought that often crosses Amp’s mind, even though she’s been around for years her heart never often finds pain from the choices she makes. She also doesn’t mourn her losses long, choosing to focus on what she has rather then what she’s lost. She also creates strong bonds with some, though there is no real defined reason as to why.

Amp doesn’t know much about her history; she doesn’t even know her real name. She’s spent her whole life that she can recall, being called various nicknames. The only life she’s known was that of the Russian Circus, she was one of their many attractions. She must have been there a long time though she’s unsure, she recalls watching many co-workers growing old and leaving the circus. She’d watch children grow and marry, bringing their own children back to the circus to enjoy the attractions.

Things changed when a new owner took over the circus, he began taking others as prisoners rather than performers. Degrading them to perform as he wished, Amp became a prisoner with many other unique people. It was when a small child named Viktor was captured and incorporated into the circus that things began to change, he was only 7 then. Amp grew very close to him, partially because of his unbroken spirit, his plans for escape or this odd connection she felt with him.

It was shortly after Viktor turned 13 that the two were able to escape. Using his mutant strength and Amp’s help the two evaded their circus captor, and then even the Russian military to stow away on a cargo ship that was bound for America. The trip from their prisoned life to American soil took the two a whole year to make.

Amp is loyal to Viktor first, she sees him as her Master and calls him such with great affection. He freed her, called her a friend and protects her from others. She in-tern does the same for him as best she can.

Heartbreak occurred when the two were separated from each other in New York; thru a burst of activity, Amp was swept away, trapped in someone’s bag. When she found freedom she discovered she had been taken across the US to Colorado, she was heartbroken for days. In her meanderings she found a large flower garden in a popular park, she loved flowers and decided to stay there. There were birds to play with and squirrels as well. But something she truly enjoyed was the children, she was able to play with them without fear . . . hiding when their parents came about. It would be a home that would last for now, though she tried not to think about the coming winter months.

Shortly after arriving at the park Amp connected with Prizm, their adventure brought Amp to the Xavier Institute where she was quickly welcomed into the fold. With so many ‘precious’ to take care of her days were busy, just the way she liked them.

About a year after she arrived, Xavier brought her to a stranger’s house. A woman he had never met and Amp had never heard of, but somehow Xavier thought it was important the two people meet. When eye-met-eye... soul-met-soul, immediately the two knew who the other was. Two parts of the same soul split into two forms. A woman going by the name Ireland Chase, but Amp remembered her from a dream she had long ago about a little girl in a field of grass. After years of not knowing, the two finally had someone to call family. Knowing how connected she was to the Xavier house Amp wasn’t ready to give everything up, and Ireland didn’t ask her to. The pair would live on their own but in the same city. Amp would have dual residence both at the mansion and wherever Ireland was.

Everyone in Amp’s life is referred to by a nickname. Here is a list of those names for consistency purposes:

The Tail End Of A Tough Day