My Passion is Writing — XSFGY — That Which Survives 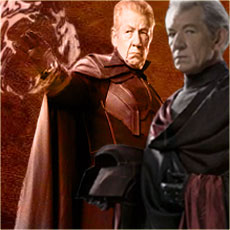 "I have been known by many names. Max Eisenhardt. Erik Lehnsherr. Magnus. Magneto. Each name marks its own sin. And one day I'll answer for those offenses."

Max Eisenhardt, or Erik Lehnsherr as most knew him nowadays, had just returned from the Savage Lands to civilization a couple days ago only. He took some months after being rematerialized during the Blip to safely close his operation at the Antarctican jungle after finding out what had happened to him due to the security records at his lab, which also took chance and time to find as he wasn't thinking about nor looking for it.

Max still had no idea who or what had caused his vanishing into dust as he walked the streets of New York again. His first destination had been the Baby Falkin, Lied's nightclub. He wanted to see if it was still open, which would mean that she probably hadn't been affected by whatever overtook him. Thankfully that had been the case. He had also contacted Elizabeth Dane last night to know if everything was alright with her and Lorna. That was how he knew his daughter was now living at his old friend's house. The time had finally come for their reunion.

He wasn't sure how his presence would be received by most X-Men and residents after so long, though he knew for sure that Charles would never deny his entrance there. To avoid unneeded skirmishes, Max levitated until just beneath the window to Xavier's study and "knocked" on it by turning the window's latch close and open to call his friend's attention to it.

There was a chess game set up and abandoned almost 22 years ago sitting on a small square table against the wall right next to one of the windows opening up Charles’ study to the gardens making up the side and front of the mansion grounds. Restored to its previous glory after the events that brought back everyone that had been taken from them, the Professor couldn’t help but glance out at them from time to time, lost in thought at how devastated much of the grounds had been for those five years. The immediate surrounds and the mansion itself had been quickly brought back to a fine and working order by the ones who’d remained at the mansion during those five years but to anyone else outside of that who came close enough to see the mansion itself would merely see the illusion it too was destroyed and abandoned.

It was a way to protect those within from any of the further repercussions that may have come from those outside, not that there had been many left after that day. Half the world’s population of all living things. Xavier would hate to have thought what could’ve been had they not been protected by a cosmic force he had many a mixed feeling about to this day.

His gaze falling on the chess game again, wondering for the umpteenth time if he’d ever get a chance to finish it one day, he sensed something but couldn’t quite place what it was. He closed the book he had been reading, still much preferring the old-school feeling of something real in his hands rather than taking advantage of the many audiobook websites available to him, and moved his wheelchair out from behind his desk. Moments later he heard a knock at the window, or rather, the latch move a few times to let him know someone was there. With all the many different mutants in the school, he believed it was one of the students, or perhaps another resident wishing to speak with him more discreetly than so obviously coming down the hall to his doorway.

Covering the distance, his eyes widened at the sight of one of his oldest friends levitating there, staring at him for a few moments, mouth slightly agape. After all this time he’d nearly forgotten this was one of Erik’s favourite ways of visiting him. Blinking once, attention refocusing, Charles gave Magneto a simple nod to let him know he could come in.

Max offered Charles a shy smile. By the way his old friend reacted he must have thought he was dead considering their old age and the fact he had disappeared for so long. It had been true for a while and maybe Xavier knew something about what had happened, but that wasn't a subject at the forefront in his mind right now. After the nod, he levitated all the way into the study and gauged the place discreetly. Not that he expected to find threats there, it was just force of habit.

When his eyes saw the leftover game, Max couldn't help a chuckle from leaving him. "I don't believe it, Charles. After all this time?" He wondered for a moment if his friend couldn't find another chess player to his level of expertise, but decided not to comment. Knowing him well, probably Xavier just kept it as a memento to remember the good times.

Xavier smiled to himself. “You weren’t expecting me to leave it where you were actually winning, did you?” he asked, well naturedly. He then motioned to one of the nearest seats. “Please, sit, unless this is simply a short visit…” he let his words trail off. “Obviously, this comes as a surprise. Tell me, what is it that brings you to my home, and yours, after all this time?” he inquired, emphasizing the fact he still considered it Erik's home as much as his own for reasons only his oldest friend would really understand.

"If someone hears you say that, they'll think I never win." Max joked, already feeling more relaxed. "Actually... No, it isn't. I mean... it depends." He took the offered seat and made himself comfortable. He sighed and continued to answer Xavier's last question. "Death... Life... Lorna... I miss her... I could've died without ever letting her know... how I feel about her..." His words were at first enigmatic until his own thoughts started to organize themselves when it came to that subject.

Ah, Lorna, of course. Charles nodded, very quickly picking up on the fact Erik had just revealed to him without even having to say it. He’d been among the dusted, and it seemed this was enough to 'scare' him out of hiding from one of the few people who could bring a sense of joy to his heart once again. If only the master of magnetism was really aware just what awaited him. There was very little chance he knew about Lorna’s love for Marcos and that the two had gone on to have a beautiful, now five-year-old, baby daughter. Revealing these things could possibly come in time. Although, perhaps letting him know about Dawn in advance could be left out as a way to let him be surprised he wasn't just a father, but a Grandfather now as well.

“Thanks to the genius of Tony Stark and the efforts of all of the Avengers, we can all be beyond grateful that eventuality didn’t end up happening, my friend,” Charles said to him. “I must tell you that your daughter has grown into a very confident woman, one who is proud of her powers and what she knows of her heritage as well.”

Max listened with attention. He wondered how Charles knew about who was responsible for bringing him back from dust, but then there was Cerebro. Would he know who caused it to happen as well? Maybe just one of those eventualities of life. “Were you affected too? What was that all about?” Nothing more needed to be said. He knew Xavier understood him completely. They never needed many words nor telepathy to just understand what the other meant.

His smile broadened as his best friend told him about his daughter. In a way, he expected it. He was the one who pushed the mutant and proud motto the most. "And what she knows of it is still so little..." He wondered for a moment about what to do next. His head was telling him something and his heart the exact opposite of that. They fought briefly before the winner got to speak up. "I don't regret what I did. I still think it was the best thing to do for her at the time, but now..." He started and then paused to sort his words. "Now it is time she knows the truth of what happened." He completed with conviction. Nothing more needed to be said. His request was made.