You Can’t Outfox A Fox 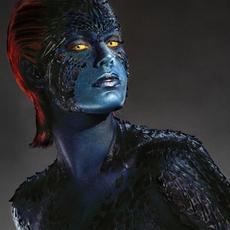 “Being in a state of flux is my norm. I am Mystique. I can be anyone.“

Raven Darkholme, to most known only as the metamorphic mutant Mystique or some other made up identities, entered the newly inaugurated nightclub, the Baby Falkin. It’s owner, Lied Nova, had been searching for her for a few years, which was easy enough for her to dodge, before giving up and disappearing herself for a few months. Now came the time to know what the feral mutant wanted with her and make a choice about what to do next.

She was “wearing” her preferred not obviously mutant form, that of a young woman with black short hair, fair skin and blue eyes. She was wearing black heeled boots, jeans, a light yellow shirt and a black jacket. Her now blue eyes searched the interior of the nightclub and there was only one person there. Raven walked assured steps, which caused her heels to make noise against the floor.

”I came due to the job opening outside. I hope it’s not too late.” Her voice was kind, but also firm and decided. She knew she was talking to Lied Nova herself and not another employee as her informants had given her a very detailed description of the woman who had been after her. “I’m Sarah Winter. Can you help me?” Her trap was set. The only thing left to be known was if the bird would fall for it.

Lied was feeling very pleased with herself, her Nightclub’s construction was complete, now she will be able to make money, but she knew she won’t be able to do that alone. Businesses such as Nightclubs needed a team to perform at optimal efficiency. So she’d sent out ads in the paper, and she had signs posted outside.  Already she had a bartender, but it couldn’t hurt to have more than one, and the security and bouncers were in place too.

When the woman spoke she turned, to greet her, taking note of her appearance, but there was something about her scent that confused her.  “Oh Not at all, Welcome to the Baby Falkyn, Ms. Winter!”  She pushed off from the stand, where a greeter would be to greet those entering. “if you are a capable mixologist there are openings at the counter there. The head of my security, says that they could also do with additional personnel in that area.” she pointed to the covered left hand, where already there was a woman dressed in only a bra, and a short skirt but she appeared to have glowing markings.

“I trust that you won’t have a problem with working alongside Mutants?” She asked as it was also revealed that the markings were merely glowing paint, and she had a long length prehensile tail reminiscent of lizards which grabbed a bottle from the shelf behind her. “So tell me, what are you experienced in?” she asked her “and are there any other questions you may have at this time?”

She knew the positions posted were for Bartending positions, as well as Security/Bouncer, but while she had the utmost confidence in her current bouncer, she knew she had to make contingency.

Raven smiled. She was a woman of many abilities and just maybe Ms. Nova would be privy to some of them. She considered the given options for an instant as her eyes followed where Lied was pointing. "No. I don't mind working alongside mutants," she answered simply. "And I'll take the bar spot, if you don't mind. I can make you a drink so you can gauge my skill," she offered.

Lied visibly grinned when her new Bartender mentioned that not only did she not mind working alongside mutants but she’d be taking the bartending spot. “Excellent choice” she stated, though she’d have said the same if she had picked Security instead.  With the decision made, and the other woman’s offer to show off what they can do.  She nodded her head “Alright, I am looking forward to seeing what you can do." With that, she moved to take a seat as she waited for Mystique to make the drink.

Raven was fast to mix a martini on the shaker available at the counter using the gin, ice and dry vermouth from the fridge behind it. She showed the mastery necessary for the job, gained throughout her many years of life and different experiences around the world. She had even been married, just for a few years, to an European noble once, so she knew the fine things of life. Once ready, Raven offered the served drink to Lied with a smile.

Lied watched as Mystique worked, and she wasn’t the only one, as the lizard tailed mutant was also watching. Lied took note of her skill, and mastery of her new occupation, and already the feral was impressed. Once it was offered to her, she leaned forward to accept the drink and observed it with both sight and smell before she drank from the glass. She was silent as she processed the taste of the drink and noted everything about it.

“Congratulations, Miss Winter, you have got yourself a job!” Lied said with a smile of her own, as beside Mystique, her new co-bartender applauded her. “I am impressed as much by the drink as your skill, clearly you have been behind a counter before.”

"Great! Where do I sign?" Raven was nothing but a skilled actress. She was feigning the most perfect state of bliss at getting the job. She looked to her co-bartender. Blue eyes paying great attention to the female with the prehensile tail. She could be useful for information on Lied later. She smiled at her in a friendly way. "Yes, I have some experience," Raven said now truthfully.

Co-bartender smiled and waved when it appeared the two will be leaving.

Lied got up from her seat and indicated that Mystique should follow her. “Come, let’s go to my office and we can get the contract set up there. “ She told her as she led the way to the stairs and then down the hall, where her office was. Mystique would notice that the moment the office doors behind her, the noise of the Nightclub can no longer be heard. of course, Mystique would spot a Peregrine Falcon just calmly munching on her food.

“My daughter, Torque” She indicated the creature before she got out the contract for her to sign. “You’ll note, I am of course paying my employees the required amount of money by law, but the tips you may receive are yours.  Also, you’ll get vacation time, but sick leaves are different, with sick leave you’ll be paid.  “ she said as she passed the contract to her.